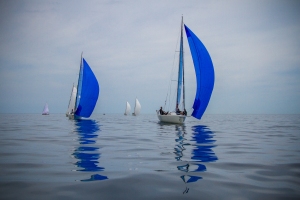 The team from Skolkovo kept hold of the Alumni Business Cup trophy, through a strong performance on the water on the Ligurian coast off Sestri Levante, Italy. They pipped London Business School by just 2 points in the end, after a relatively poor performance in the onshore games, which LBS won.

This was the third regatta in the Sunsail MBA Global Sailing League.

Evgeniya Semykina’s team won seven out of the ten races, with LBS taking six second places. But the onshore games could not be discarded, and so the regatta came down to the last two races.

Third place was taken by Marc LeBorgne’s INSEAD team, keeping the French School’s claim on the league going strong. HEC, Kellogg/WHU and a second INSEAD boat made up the six- strong fleet.

The regatta was held in J/80 sports boats, and was organised by INSEAD, with race management by Blue Project. It took place on the 18-20th May.

A review of the regatta is available on the ABC website