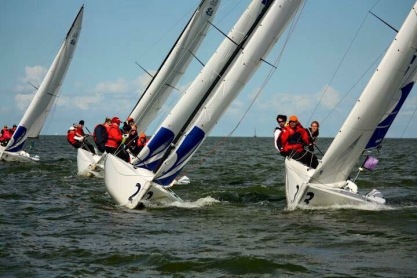 Skolkovo sent two teams to the RSM Regatta in Medemblik, The Netherlands, and came away with first and second places. Third place was taken by RSM’s Alumni B team.

The regatta was made up of 36 races, each pitting a different combination of six of the 9 teams against eachg other, while rotating the teams among the boats. Each team sailed 24 races across the two and a half days of the regatta.

The winning team, Skolkovo 1, won 16 of the races, coming second in 6 and 3rd in just 2, to post a total of 34. Their compatriots in team Skolkovo 2 won 11 of the remaining races, ending the regatta with 43 points. RSM’s Alumni B team won 4 races, with 60 points. The remaining three races were taken by LBS Blue, who came in 4th.

The regatta was sailed in the 2012 Olympic class of Elliott 6metres boats, with crews of 3 or 4.

The event started out with rain and strong winds during practice on Thursday morning, and the committee banned spinnakers for the races on the first afternoon.  The winds abated and the sun came out on Friday, for a day of champagne sailing, while Saturday saw fluctuating winds, with the same sun.

With such short races, the start was important. However the top teams also consistently overtook the rest of the field in the upwind legs, and consolidated their positions in the downwinds.

Medemblik proved an excellent host town, the teams staying in a nearby “bungalow” village, and enjoying the hospitality of the sailing centre for a barbecue on Saturday and the glamourous location of Radboud castle on the Saturday evening for the prizegiving and gala dinner. The regatta was the sixth annual event organised by Rotterdam School of Management’s Sailing Club.