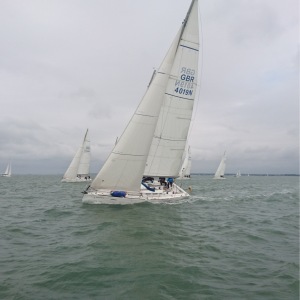 INSEAD won their second regatta of the year at the Cranfield Regatta on the Solent, off the South coast of England. Once again, a regatta was dominated by a single team, as Kit Glover’s crew won five of the six races.

The Sunsail MBA Global Sailing League’s fourth regatta was the biggest to date with 13 teams lining up on the start line, with a strong contingent from the host school, Cranfield, with six boats.

One of the Cranfield crews came in second, while ABC winners Skolkovo could only manage third. END_OF_DOCUMENT_TOKEN_TO_BE_REPLACED

The team from Moscow’s Skolkovo School of Management scored a near perfect 6 points from 5 races to announce their presence on the MBA sailing circuit, leaving the rest of the pack trailing in their wake.  The Global MBA Trophy regatta, in Piraeus, Greece, saw 8 teams competing in Platu 25 Sportsboats in Division A and 3 teams compete in Bavaria 42s in Division B.

Skolkovo came first in the last four races, having come second in the first race of the regatta. Nearest challengers LBS scored three times as many points with 18, while the third place of the podium was taken up by the INSEAD/MIP/Bocconi mixed crew with 20 points. END_OF_DOCUMENT_TOKEN_TO_BE_REPLACED