Skolkovo win their second regatta of 2018, at the Cranfield regatta in the Sole

INSEAD won at the start of the season in Lanzarote, in the middle of the year on the Solent, and then at the end of the season at Santa Margherita. In the meantime, they came third at the ABC and 4th at the Global MBA Trophy, and discard their points from the RSM regatta. END_OF_DOCUMENT_TOKEN_TO_BE_REPLACED

INSEAD won their second regatta of the year at the Cranfield Regatta on the Solent, off the South coast of England. Once again, a regatta was dominated by a single team, as Kit Glover’s crew won five of the six races.

The Sunsail MBA Global Sailing League’s fourth regatta was the biggest to date with 13 teams lining up on the start line, with a strong contingent from the host school, Cranfield, with six boats.

One of the Cranfield crews came in second, while ABC winners Skolkovo could only manage third. END_OF_DOCUMENT_TOKEN_TO_BE_REPLACED 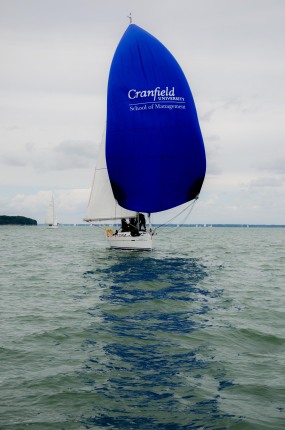 Cranfield Business School won the 2015 edition of the Cranfield Regatta, winning three races out of the five. This season’s leading team, Skolkovo could only manage second place, winning the two other races. INSEAD came in third, while 2014 winners, LBS came in 4th.

The Cranfield team was led by a professional skipper and first mate, provided by the charter company.

The Cranfield regatta marks the mid point of the Sunsail MBA Global Sailing League, and is sailed on the waters of the Solent, between the Isle of Wight and the Mainland on the South Coast of England. The waters are famous for their tricky tidal currents, and frequent traffic – whether it be other racing yachts or massive cargo ships.

The Sunsail MBA Global Sailing League’s sponsor, Sunsail, provided the boats, the race committee and a lot of the organisation. The boats are Sunsail’s matched fleet of Beneteau F40s, which provide a different challenge to the smaller boats seen in most of the series’s regattas: Crews of 8, 42 ft boats and large symetrical spinnakers with dip-pole gybing. END_OF_DOCUMENT_TOKEN_TO_BE_REPLACED

The 2015 Cranfield Regatta will take place in the Solent, between the South coast of England and the Isle of Wight on 10 – 12th July 2015.

This is a vital regatta in the Sunsail MBA Global Sailing League season because of the large number of participating boats – 19 boats in 2014, and up to 36 boats in the past. If a school misses out on theregatta, they are scores one point more than the number of boats involved, which can be very hard to overcome.

The boats are the largest in the league: 42 ft Beneteau F40s, with modifications made for Sunsail, sponsors of the league, and providers of the boats and regatta organisation.  Crews are 8 – strong.

The regatta hosts two parties: one on Friday night to welcome the crews to the venue and a gala night on the Saturday.  Details of how to sign up will be posted here once they are announced.

The regatta is hosted by Cranfield School of Management’s current MBA class.

The MBA Sailing League is excited and proud to announce that Sunsail, the world’s largest sailing holiday company, has agreed to sponsor the league for the 2015 season.

As part of the sponsorship agreement, Sunsail will provide a weekend’s sailing or racing in the Solent off the South coast of England to the business school team that wins the 2015 league. This prize, is worth over €1,400.

MBA Sailing league co-ordinator, Rob Cotterill, said: “Sunsail manage one of the biggest and most competitive regattas of the MBA sailing season, the Cranfield Regatta, so we welcome their decision to partner with the league and look forward to a long and mutually beneficial relationship.

The MBA Sailing League brings together five sailing regattas and the teams of MBA students and alumni who race in them, encouraging business school teams to compete throughout the season, and rewarding the most consistent and most successful.  The regattas that make up the league are the Global MBA Trophy, held in Athens in April; The Alumni Business Cup, held in different locations Europe in May/June; The Cranfield Regatta held in the Solent on the South coast of England in July; The RSM Regatta, held in the Netherlands in August and the Rolex MBA’s Conference and Regatta held in Santa Margharita Ligure, on the Lugurian coast of Italy in September. Business Schools who have ranked highly in the league include London Business School, INSEAD, Kellogg, HEC, Bocconi and Cranfield.

London Business School retained the Cranfield Regatta trophy in fine style, winning all five races to score a perfect four points  (including discard). The rankings leaders brought their A team and their A game to the regatta, following their disappointing performance at the ABC in France.

Bath and Cranfield 1 filled out the top five.

The Cranfield Regatta, now in its 23rd year, is the longest – running of the MBA regattas, and  one of the best attended: 19 boats competed for the trophy this year (albeit with 8 from the home school, and one representing State Street Corp.)

the racing took place on the Solent, the stretch of water between the South coast of England and the Isle of Wight. Day one started with winds at 20 knots gusting into the high 20s, leading to poling out of the Genoa on the downwinds.  Spinnakers came out by the end of the day, and Sunday was perfect Spinnaker- flying weather. END_OF_DOCUMENT_TOKEN_TO_BE_REPLACED